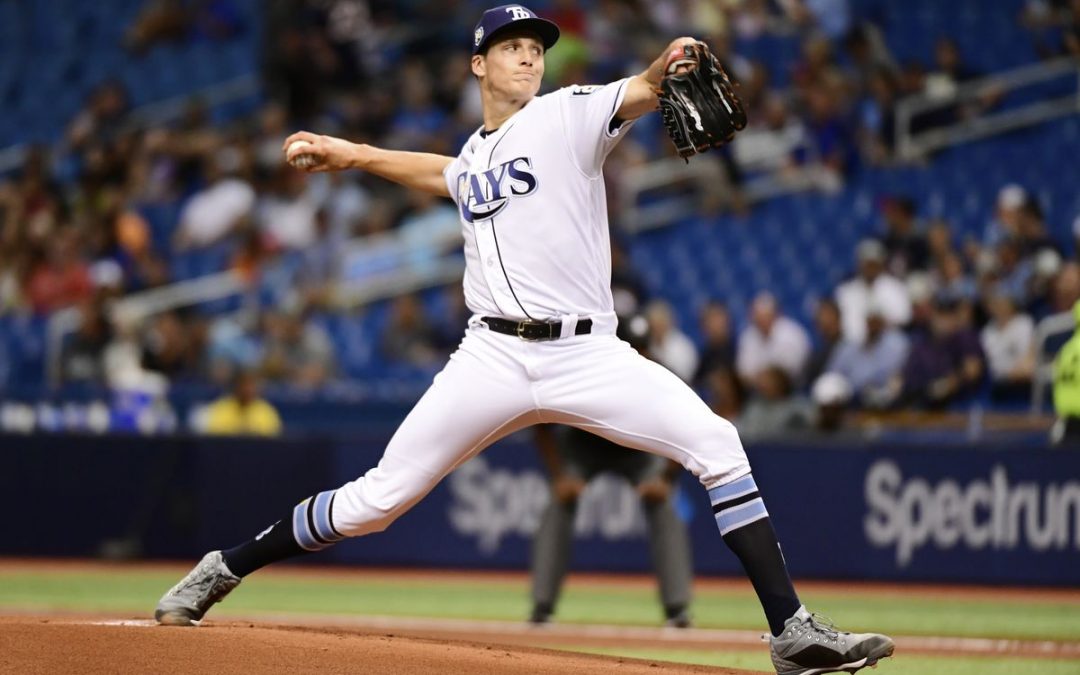 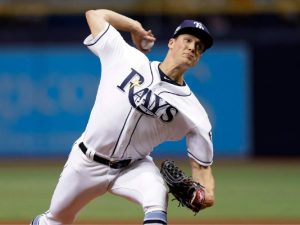 This is going to be one of my favorite Breakdowns to this date. Why? Tyler is a friend.. a former teammate back in 2014 when we both played in the Pittsburgh Pirates Organization together. To me, and everyone else that saw Tyler pitch in the Minor Leagues, knows that what he’s currently doing for the Tampa Bay Rays is no accident. Tyler is an absolute stud. Yes he’s physically gifted (6’8) but I believe it’s his work ethic and his desire to be the best that separates him. I had Tyler on my Podcast back in January while he was getting ready for the 2019 Season and just hearing the way he was talking about the position he is now in with the Tampa Bay Rays are really starting to understand himself I knew that 2019 was going to be a breakout year for the tall righty. In this Blog I’m going to be breaking down the following:

I had the honor of having Tyler on my YouTube Channel as well where he gave the viewers an up close look at different grips, personal cues, as well as adjustments he’s made over the course of his career. I’ll be sure to link ALL of that below when I start to dive in on the given subject.

You can purchase my Plyo Ball Drills + Routines eBook to get a look at all the Drills I use with the Plyo Balls as well as my own personal Plyo Ball Routines.

When I first saw Tyler pitch way back in 2012 he didn’t quite know what he was doing throughout his delivery. He was going through a major growth spurt and although very athletic it was evident that he couldn’t quite piece together what he was trying to do on the mound and to be fair.. who really does when they’re 19 years old. It was around that time that word got out around the Pirates Minor League Affiliates that Glasnow “all of the sudden” started throwing 95+ mph. In the years to come Glasnow would be a very well known name across all of Baseball as the dude who was putting up ridiculous “Video Game” numbers. The one thing that was always a question mark surrounding Glasnow was his ability to consistently be in the strike zone. I don’t want to spend too much of this Blog talking about the past but I do want to give you an understanding of where he was at so I can show you where he’s currently at. With that being said.. lets hear from the man himself regarding his mechanical issues from years past.

Notice how Tyler now identifies what it was that was causing his inconsistency. We always used to kind of joke with him due to his ball literally “cutting” like 3 feet on occasion. From the bullpen we sometimes thought it was a Slider but then the radar gun would say 98.. andddd that’s just gross lol. The problem was that Glasnow couldn’t remain consistent with his mechanics due to the timing issue that often arose in different situations throughout the course of a game. Take a look at this video below to get a visual of what we’re talking about here..

Although stupid impressive Glasnow, like mentioned before, had a tough time commanding the baseball due to the inconsistent timing of his delivery. Now lets fast forward to his most recent outing at the time of this Blog (April 28 vs. Boston) to see the adjustments he’s made within his delivery.

You’ll notice that Glasnow does a much better job at controlling his head positioning as his body descends down the slope. This is something I talk about often in regards to how a pitcher can control his weight as he begins to transfer his energy. This allows Glasnow’s long arms to have more time to get into efficient throwing positions as he nears front foot strike. As you’ll notice Glasnow REALLY gets extended with that release. To put that into further context check out this chart via Baseball Savant that FiveThirtyEight posted today comparing Fastball Extension per every MLB Pitcher. 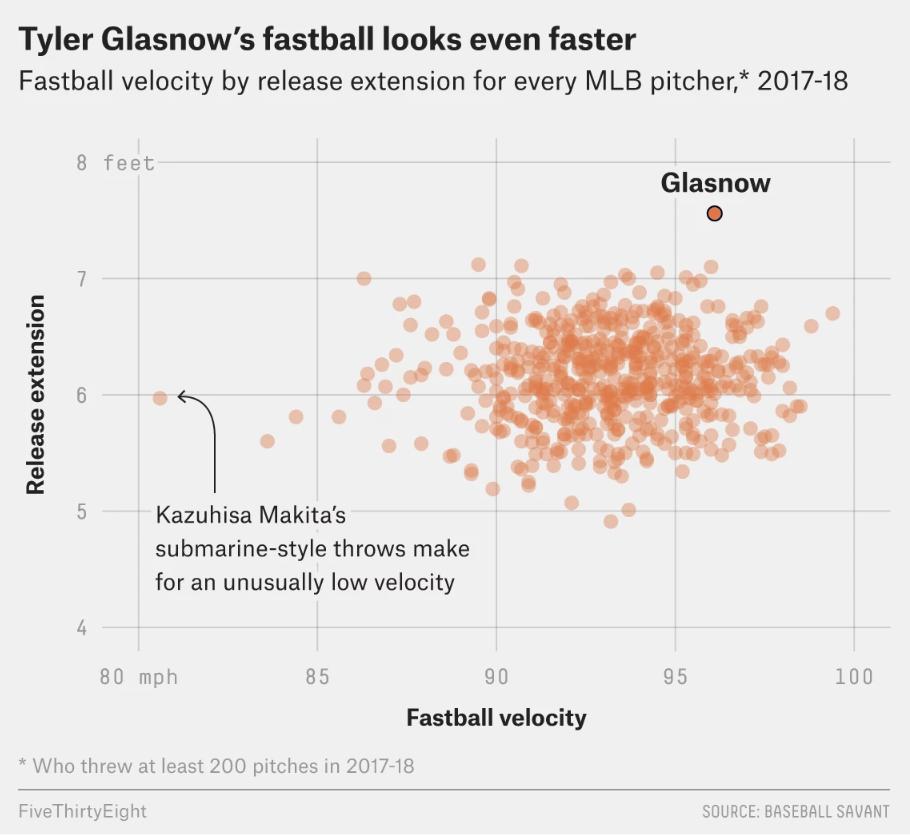 What this also means for Glasnow is that his “Perceived Velocity” is going to be faster than his actual velocity due to his unreal amount of extension. You’ll see in this list below that he ranks only behind Jordan Hicks in Avg Perceived Velocity which comes in at 99.25 MPH whereas he comes in at #28 on Avg Velocity.

In the minor leagues Glasnow was known for having an electric Fastball. When he got up to the Big Leagues you could tell that his Fastball wasn’t quite where it was in the Minors. Mostly due to the fact that his mechanics were all out of whack and he would more often times than not find himself “feeling” for it. As you’ll see in this graph below Glasnow’s Fastball has gotten back to that plus plus offering that he had in the minor leagues since he’s made the necessary adjustments mechanically as well as going to a new Organization.

The biggest thing that sticks out to me when looking at his Data Analytics is the fact that hitters are hitting .186 off Glasnow’s heater that he throws 65% of the time and they’re swinging and missing at it 20% of the time. That says a lot especially as a Starting Pitcher when you have to face the lineup 2-3 times per outing. Lets take a look at a Slo-Mo video of Glasnow’s Fastball.

You’ll notice that Glasnow has his fingers fairly spread apart. This is due to him saying that if he closes the gap between the two fingers he just cuts it off. This is why you see Glasnow rank in the middle of the pack when it comes to his Spin Rate which, so far this season, comes in spinning around 2201 which is relatively low for a guy that can hit triple digits and doesn’t rely on sinking action. Typically how it works is the closer the fingers are together the more pressure you will have when releasing the ball with both fingers. Think about the goal of a Splitter (Click Here for Gausman Splitter Breakdown) you want to take as much spin off the baseball so you naturally split your fingers therefore there’s very minimal pressure behind the ball. This is kind of the case with Glasnow’s Fastball in that it’s not spinning all that much because the pressure being applied to the baseball isn’t necessarily directly behind the center of the ball. Glasnow talked about this when he came on my YouTube show. If you’re interested in watching the FULL EPISODE on Tyler Glasnow’s Fastball click here – Inside The Baseball Mind – Tyler Glasnow Fastball

Similar to Glasnow’s Fastball, his breaking ball also increased in Velocity and drastically increased in Spin. When he broke into the Big Leagues Baseball Savant has his Curveball spinning at 2458 RPM’s and now he’s spinning that pitch at 2817 RPM’s. See Below. 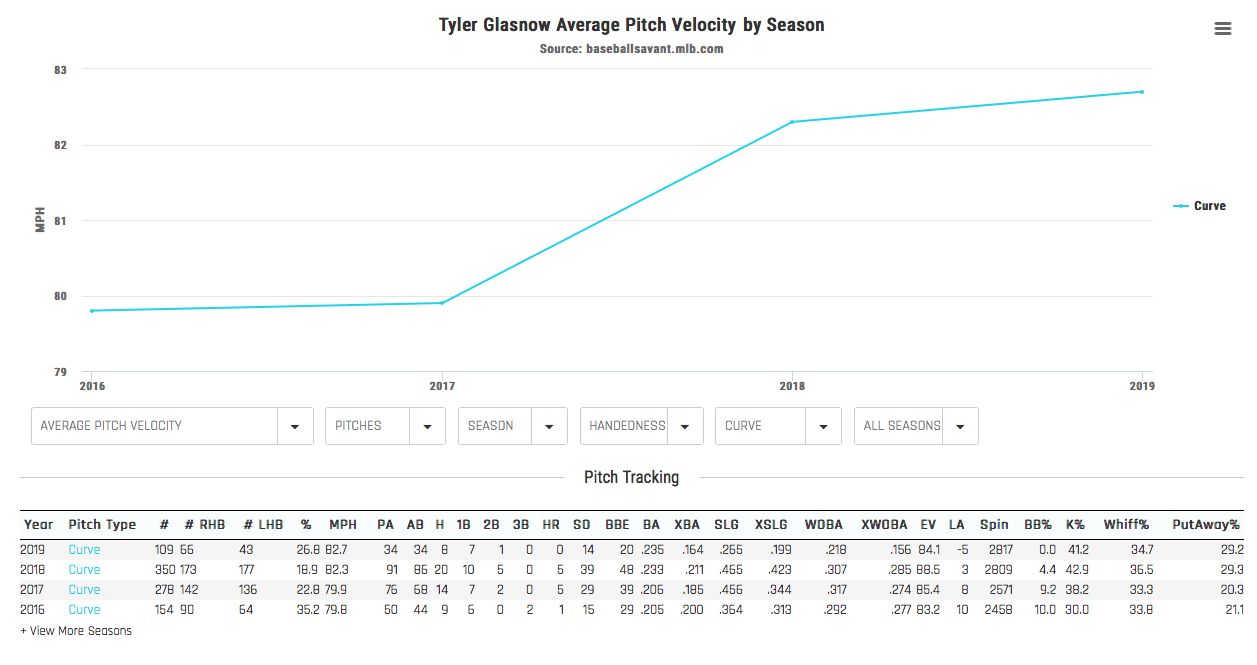 The cool part about this information is that Glasnow talked about the change that he made with this pitch. As you’ll hear in the excerpt below, Glasnow considers his Curveball a Slider now. Even tho Baseball Savant will register it as a Curveball still. Hear Tyler talk about the change he’s made with his breaking ball in this short video taken from EPISODE 4 (Part 2) of Inside The Baseball Mind w/ Tyler Glasnow. Sorry for the fuzzy video quality.. wifi probs.

Whatever works right? Definitely seems to be working for him. That’s why I always encourage guys to come up with personal cues that will benefit them. The beauty of personal cues is they’re personal.. they could make zero sense to the rest of the world but hey, doesn’t really matter. Click this video below to see Glasnow’s Curveball in action.

To say Glasnow’s Curveball is a swing-n-miss pitch is selling it a bit short. He’s always had an absolute banger of a Curveball and it appears the adjustments that he’s made has only improved the offering. In 42 Plate Attempts facing the Curveball hitters have struck out 20 times while accumulating 9 Hits (8 1B’s) with an Avg Exit Velocity of only 83.2. The most impressive stat that jumps out to me regarding Glasnow’s Curveball is he’s thrown 132 of them so far this season and out of those 132 CB’s 83 of them have been Strikes. Pretty dang good for a dude that had “control issues” a few years back.

Of course I think Glasnow is going to be a force in this league for multiple years. I’m not just saying that cause he’s my boy either. For Glasnow it’s always been about comfort.. as with any younger pitcher. If you can get comfortable in the Big Leagues then you’re doing something right. I think right now Glasnow has really found an Organization that he can thrive in. I really do believe that he was traded at the perfect moment in his career. Often times we see really good talent that have struggled and then as soon as they get a change of scenery they blossom. I credit the Tampa Bay Rays Organization as well as Glasnow for making the necessary adjustments to really bring about the best in him that majority of us who’s had the privilege of being around him knew was always there. In honor of this breakdown that took a good 5 hours to create.. Enjoy Glasnow getting hyped..

No copyright was intended when creating this Blog.

If you’re interested in a Baseball Specific Strength Training Program Dr. Heenan offers an Online Training Service in which he assesses any deficiencies you may have and personally creates a workout program to help you become the athlete you’ve always wanted to be! The best part is.. I can save you $100 on the activation fee!

You will enter your email at the bottom of the page, you will then receive a follow up email with the final details of the program/on-boarding. Upon signing up use the code “robby” and you will receive $100 dollars off!