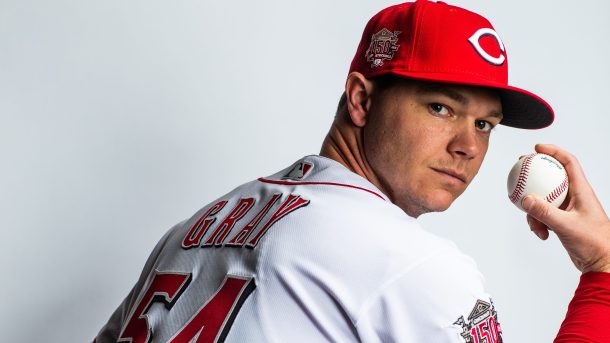 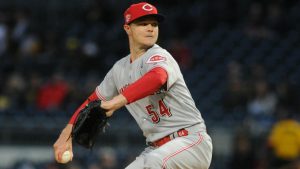 For those of you that follow baseball or follow Sonny Gray you will know that he publicly stated his opinion on why his time with the Yankees was, statistically speaking, not a great time for him. The once very highly touted pitcher who matched Justin Verlander pitch for pitch in one of the most epic pitcher duels I have ever witnessed in the playoffs was beginning to look like he just didn’t have it anymore. Speaking from personal opinion here but whenever I thought of Sonny Gray I always thought of that disgusting Curveball he threw. Obviously there’s a few other things that made him standout like his height and his mid 90’s Fastball but for me I was always so impressed with his ability to rip a Curveball with the best of them. As talked about, by Gray, in this article by Sports Illustrated his Curveball and Slider were beginning to mesh into basically one pitch. The yankees were having him throw more Sliders in more counts that he wasn’t really comfortable throwing them in. This is typically the problem for a pitcher when you throw both a Curveball and a Slider. They can very easily start blending into a very similar pitch and for most guys that’s not what you want. Guys, including myself, want 2 different breakers that are different in size, shape, and speed. FanGraphs also talked about in an article dating back to 2017 that Sonny Gray was one of the harder pitchers to chart due to his breaking balls being very similar. Stating that “Sonny Gray is a mystery.” It’s funny because when I knew that I wanted to write a little breakdown on Gray’s breaking pitches I did some digging into the scene. When I do my digging I’ll watch a ton of game footage from the player that I’m doing the breakdown on. Some TV providers will do a great job in showing catchers signs, slo mo video of grips, and even analyst will talk about pitch types/grips. When I dove into watching Gray the thing I found was pretty much the same thing FanGraphs was talking about in the article mentioned above. It’s extremely difficult to differentiate between Gray’s Curveball and Slider. After watching a couple of his outings I’ve kind of came to a conclusion on where he’s most comfortable with the 2 pitches and don’t take this as gospel because this is just my opinion after watching the way Gray sequences his stuff. I believe that Gray feels most comfortable when throwing his Curveball early in counts due to his ability to throw that pitch more in the strike zone when he wants to. When Gray gets to 2 strikes it appears that he likes going to the Slider because he has more freedom when he’s got 2 strikes on a guy. Meaning that he doesn’t have to worry about the pitch in the dirt not being effective because hitters have to expand the zone when there’s 2 strikes. This correlates to the article by Sports Illustrated mentioned above because like Gray said the Yankees were having him throw that Slider in counts that he would typically throw the Curveball and his freedom on that pitch wouldn’t be there due to “having” to throw it for a strike.

Now lets break it down with some footage that I think will be good indicators as far as what I’m talking about.. You can even be the judge. I’m going to show 2 different pitches from 2 different Sonny Gray starts from this year (2019). The first one is going to be what I consider a Curveball based on the release, depth, trajectory, and spin. Have a look.

Now here’s what I would consider a Slider based on the location of the pitch (Backfoot to a lefty), release, and trajectory of the ball. Have a look.

Well I told you what I think so let me know in the comments what you got on these two pitches. I remember reading something (don’t remember what it was) that said something about Gray not having a “Curveball” and a “Slider” but a breaking ball and a harder breaking ball. This actually is fairly accurate when watching him in a few starts this year. If you really look at his release on the 2 pitches they’re very similar. Most of the time when a Pitcher releases a Slider his fingers will be behind the baseball a bit. With Gray, he releases his “Slider” as if he’s throwing a Curveball, leading with the pinky and supinating the wrist.

Well lets talk about the grip for “The Curveball” now. The best part about this is that I don’t really have to do much for you guys. All I have to do is tell you to click this play button below to hear the man himself talk about his grip for the pitch. Some interesting bits of information as he talks with John Smoltz during Spring Training of 2019. Have a look.

I’ve never heard what Sonny Gray talks about before. Someone who taped their 2 fingers together for it to feel like 1 strong finger. That’s pretty great and I’d say that it has worked just looking at his Data Analytics on the pitch. As you’ll see below, per Baseball Savant, Sonny Gray’s Spin Rate on the Curveball has always been near the top in the league.

What’s interesting for me to see is that so far in 2019 hitters are hitting .333 against the pitch. For a pitch that just by looking at the Data Analytics would be considered “elite” it’s not playing as if it’s elite so far this year. But what I will say is that I do really like the way Sonny Gray is setting up hitters with the inclusion of his Curveball and Slider. As I mentioned earlier I think Gray is just more comfortable with throwing his Curveball early in counts for “strikes” when he needs to. As you’ll see in this video below Gray throws multiple Curveballs to Freddie Freeman and it’s not until he gets to 2 strikes in which he rips a Slider that’s 3-4 mph harder than any of the Curveballs he’s thrown to Freeman to get him swinging for the strikeout.

This makes it extremely hard on the hitter to distinguish which breaking ball it’s actually going to be. Based again on Gray’s Data Analytics the movement on the 2 pitches are just a bit different but the velocity is somewhere in the 2-3 mph range difference.

You’ll see here a better visual of Sonny Gray’s breaking ball. To be completely honest with you I’m not too entirely sure which pitch this actually is. Statcast has it as a Slider I think just because of the speed but if you look at the shape it’s very similar to that of his other Curveballs just with a few mph’s added to it.

That video gives you a good look at what I was talking about earlier in regards to having his hand supinated as his arm comes thru the zone. Something that a Pitcher would do when throwing a Curveball. But to be completely honest.. at the end of the day.. who really cares right? This pitch is obviously fairly nasty and I think the way he sequences guys with it makes it even nastier.

Here’s a good angle of the pitch shown from the front. Notice how Gray absolutely rips through this pitch. No accident that the dude can throw this anywhere from the low 80’s to the upper 80’s.

I think it’s interesting when first reading that article about Sonny Gray’s time in the Yankees Organization because you’d think that the man didn’t have a good Slider. I think the misconception is that Sonny Gray actually has a fantastic Slider. Just to put it into context so far this year (2019) hitters are hitting .042 with a Whiff Rate of 45%! So yeah, he does have a good Slider but again I think it just comes down to when is he most comfortable on the mound? He has a unique repertoire of pitches and he knows how to best sequence his stuff. For any pitcher out there we know that we’re at our best when we’re 100% comfortable out on the mound not trying to be anyone that we’re not.

I think Gray is going to have a breakout year in 2019. The stuff is there and he’s definitely comfortable out there. Not to mention he’s got his old pitching coach from Vandy back as the Reds pitching coach so that’s going to make him even more comfortable.

No copyright was intended when creating this Blog.

Feel free to Contact Me with any questions you may have!

If you’re interested in a Baseball Specific Strength Training Program Dr. Heenan offers an Online Training Service in which he assesses any deficiencies you may have and personally creates a workout program to help you become the athlete you’ve always wanted to be! The best part is.. I can save you $100 on the activation fee!

You will enter your email at the bottom of the page, you will then receive a follow up email with the final details of the program/on-boarding. Upon signing up use the code “robby” and you will receive $100 dollars off!

Care to Donate to the cause?